The String class represents character strings. All string literals in Java programs, such as “abc”, are implemented as instances of this class.

String are constants; their values cannot be changed after they are created. String buffers support mutable strings. Because String objects are immutable they can be shared. For example:

Here ae some more examples of how strings can be used:

The Java language provides special support for the string concatenation operator (+). and fro conversion of other objects to strings. String concatenation is implemented through the StringBuilder (or StringBuffer) class and its append method.

Above all, there have some emphasis about string, such as:

final: In Java, final is a modifier which is used for class, method and variable also. When a variable is declared with final keyword, it’s value can’t be modified, essentially, a constant.

immutability: In simple terms, immutability means unchanging over time or unable to be changed. In Java, we know that String objects are immutable means we cant change anything to the existing String objects.

Here is differences between final and immutability:

Pictorial Representation of the above Program

why string is final

JVM divides the allocated memory to a Java program into two parts. One is stack and another one is heap. Stack is used for execution purpose and heap is used for storage purpose. In that heap memory, JVM allocates some memory specially meant for string literals. This part of the heap memory is called String Constant Pool.

In the other hand:

This is how String Constant Pool looks like in the memory: 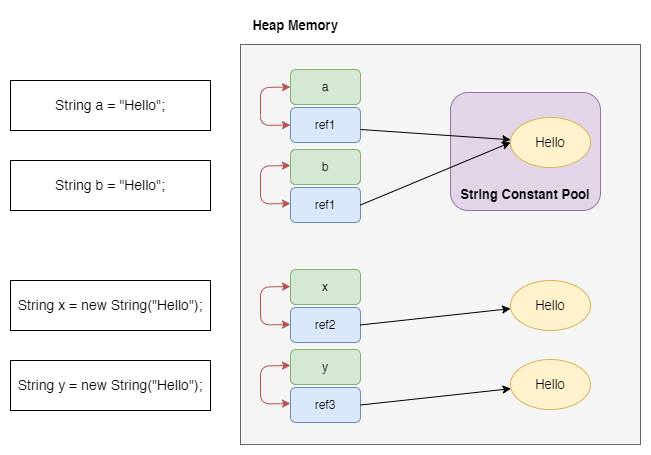 When you create a string object using string literal, JVM first checks the content of be created object. If there exist an object in the pool with the same content, then the reference of that object. It does not create new object. If the content is different from the existing objects then only it creates new objects.

But, when you create string objects using new keyword, a new object is created whether the content is same or not.

The following code fragment asks users for their name and age:

To understand what is happening, you have to understand that the Scanner doesn’t see input as multiple lines, like we do.

To solve this problem, you need an extra nextLine after nextInt.

This technique is common when reading int or double values that appear on their own line. First you read the number, and then you read the rest of the line, which is just a newline character.